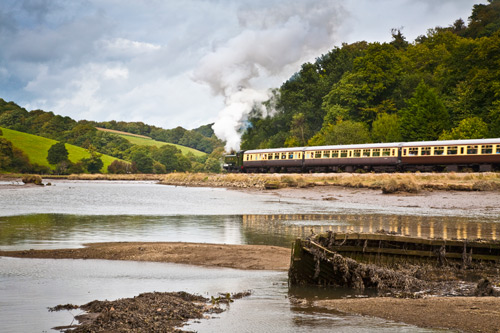 A steam train on the Looe Valley line
19/09/2010
The Looe Valley Line is one of the prettiest stretches of railway in the country, and somehow survived the Beeching cuts of the 1960s. The line was originally opened in 1860 and at that time it reached only as far as Moorswater, below Liskeard. It was was used only for freight until passenger services started in 1879.

To mark the 150th anniversary of its opening, the First Great Western railway company ran a number of steam-driven services on two successive Sundays in September 2010.

This shot shows a small steam locomotive hauling traditional carriages up river, above Terras Bridge. Out of the picture, the train was pushed by a more modern diesel in order to manage the steep gradient from Moorswater to Liskeard, the final section of the line that was opened in 1901.
Next
Previous